﻿﻿﻿﻿﻿Greetings, dynasty adventurers! We are pleased to announce the follow updates for you today!

﻿Original Wilderness we have finally added back the original wilderness map to the dynasty world now. There are also some slight changes, shortcuts and other map additions.
Legends's Guild Underground has been updated to support more cannons, more npcs and other benefits!
Edgeville has also been changed to support border PK and easier navigation for shops.

We have added a screenshot feature to the Desktop client﻿. You can take manual screenshots by pressing the F12 key. You can also enable Auto Screenshots in the Settings Menu. The auto feature will automatically screenshot important events for you, such as: Kills, Quest completions, Level ups, Receiving a pet, completing an achievement etc.

Hotspots
The hotspot system will no longer rotate only between Castle or Graveyard. There are now a total of 4 hotspot locations which will be on rotation every 2 hours, these locations are:

Each location has different benefits to them, you can use ::hotspot command in-game to see the current benefits.

We have also updated the indicator to show if you are in the active hotspot location or not.

﻿Inside Castle you will find the Gaia boss just like before, however she is now controlling the Castle. In order to defeated Gaia and get GUARANTEED emerald chest drop (x2 if hotspot benefit is enabled), there must be minimum 2 clans with +2 members in the area. Server will announce what clan and which player has got the kill and will also announce who picks up the loot. As soon as you have picked up the loot, you are not able to logout for 30 seconds.
Requirements to attack: You need to be in a clan with at least 2 clan members online in castle, Minimum combat level of 115.
Gaia will be on cooldown for 2 hours after she dies.
If clans are caught win trading on Gaia your clan will be banned from accessing the content.
Loot Crate System
﻿We are excited for you to try out the new Loot Crate System added to the server. Every 2.5 hours there will be a crate landing somewhere in wilderness. If you take a look at the World Map, the exact location is marked with a CRATE ICON.
As soon as you know the location of the crate, you or preferably your clan should navigate to the location and start the activation timer on the locked crate. The timer will start counting down from 10 minutes. Now its up to you and your team to battle other players for the loot. Once the countdown is up anyone can loot the items from the loot crate interface. As soon as you have picked something from the Crate, you are not able to logout for 30 seconds.
The crate will contain juicy items, and also has a chance to drop a new item: Golden Knife.
Use ::crate command for next arrival. 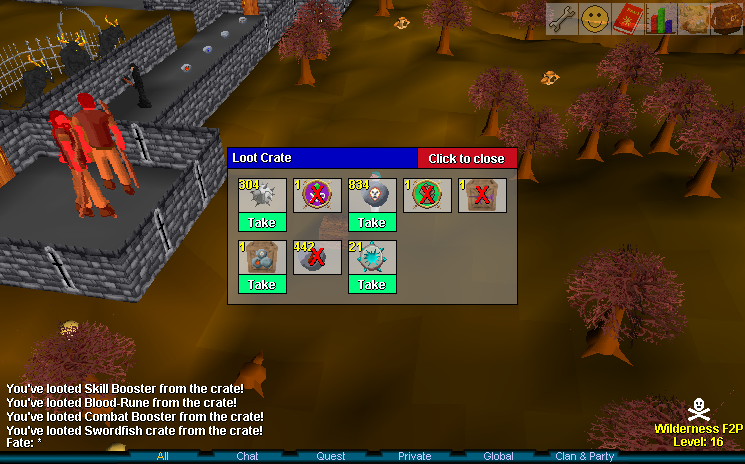 Batching﻿
You will no longer need to wait for the batching to complete, you can now simply just walk or do other actions in order to stop the batch progress.
NPC Database
The NPC Database has now been updated and support searching for items as well as monster names in the search bar. The drop ratio is also revealed in 1/X format.
Teleport Stones
Teleport stones has been updated to save any location you desire (only one at a time). Right click the stone and save your new standing location. You are also asked to add a name to your new location so it's easier to remember where you last saved!
Other
We hope you'll enjoy this update, and are as excited as us for more!